On Saturday 28 December 1839 three boys were committed to serve 30 days Hard Labour at the House of Correction, Great Yarmouth.[i] On 2 January 1840 they were joined by two more boys, also sentenced to 30 days. Over the next month I will blog each day about the boys’ experience inside the gaol in order to explore what it meant, day-by-day, to serve time.

During their imprisonment, the five boys were taught together by the prison visitor Sarah Martin. She became deeply attached to them. In her Everyday book the teacher would write more regularly and fully about them than other inmates and with a growing mix of tenderness and concern. At the end of their sentences she would be reluctant to let them go.

I too am enchanted by these boys. They have become ‘my boys’. For years I have searched obsessively for them and, like Sarah Martin, I do not want to let them go. In the coming blog-posts I aim to reflect on what this research means to me and the different strategies I have devised for uncovering the gaol’s many histories. But these blogs will also be opportunities to look for things I have missed. What else can I discover about the five boys that so far has eluded me?

Since I wrote a few days ago about Christmas at Yarmouth Gaol in 1839 the boys have been on my mind again. Looking at the gaol committals over the festive period that year, I wondered which offences might be related to Christmas as, surely, was George Mills’s theft of a plum pudding. What of the five boys?

The apprentice twine-spinner (or rope-maker), Robert Harrod, aged 15, was sentenced to Hard Labour for being absent from his master’s service. Failing to turn up to work after Christmas, it seems almost certain Robert had got carried away during the festivities. The Gaoler noted this was his first offence but in fact Robert had previous. Aged 12 and early in his apprenticeship, Robert had been brought to the gaol by his mother complaining about his absence from home. Obligingly, the Mayor had sought to reinforce her parental authority by sentencing Robert to a week’s imprisonment for being ‘idle and disorderly’.[ii]  In all likelihood, Robert had continued to roam the streets with his mates and had spent Christmas 1839 in their company.

Walter Tunmore, aged 12, had also briefly visited the gaol before. On 18 November 1839 he had been charged with stealing a basket containing books from Mr Forder’s cart, though the boy could not read or write.[iii] He was released two days later, as were many first-time offenders, but the shock of imprisonment apparently had no effect. On 28 December Walter was sentenced with William Hickling, aged 14, for being rogues and vagabonds, intent upon stealing chickens. Was this another seasonal offence – the opportunity to make a few pennies by selling the festive bird? Or did the boys hope to treat their families? Walter’s father, a labourer, struggled to feed his children and at least once had appealed to the poor law guardians for an allowance of flour.[iv] Unable to feed her family, in the recent past William’s widowed mother had taken her three sons into the workhouse.[v]

So, thinking about the timing of their committals, brings into focus the seasonal context of the boys’ convictions that hitherto I have missed. What else might be revealed by exploring the boys’ imprisonment in historical time – by examining time served day-by-day? What did it mean for the five boys to be sentenced to 30 days Hard Labour? As a child, a month passed much more slowly for me than it does now when my days are filled with more work than I can manage.  At the start of their sentence did the boys have any conception of thirty days and over the month how did they sense time passing?

Serving time is integral to modern forms of discipline and punishment. In the 1830s and 1840s these were still in the process of construction. At Yarmouth, idle apprentices and rogues and vagabonds, like the three boys above, were no longer whipped but rather subjected to prison time and with it, supposedly, the loss of personal autonomy. Since the early nineteenth century, legal reformers like Jeremy Bentham had campaigned for standard sentencing so that offences would receive a fixed and known penalty. Likewise penal reformers pressed for prison discipline in which inmates’ time would be regulated by timetable: waking, eating, working, exercise, instruction, sleeping – all would be governed by the prison clock.[vi]

For the pioneers of penal reform, prison discipline was meant to do more than deprive inmates of their own time; it was to inculcate in them a sense of order and the productive value of time. This was not a new idea. Since the Elizabethan period, vagrants and the disorderly had been sentenced to Houses of Correction so that they might learn discipline through hard labour. Historians have linked this model of correction to the emergence of industrial society and capitalist work discipline. In the nineteenth century the ordered running of the prison regime would mirror the ‘clocking on and off’ of the modern factory. 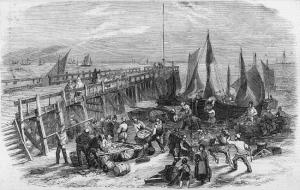 Edward Thompson has charted the development of this new conception of time and management of social and economic life through the rise of both factory clocks and personal watches.[vii] But few inmates at Yarmouth Gaol appear to have had their own time pieces. In 1839 the Gaoler listed the personal belongings of 79 inmates on their admission; only five, all men, were in possession of a watch.[viii] For most Yarmouth inmates, time outside of gaol must have been measured by the rhythms and shades of day and night and the activities that went on around them: the comings-and-goings of family and neighbours, carriers and street-vendors, the arrivals and departures of fishing boats at the port, the shift changes at Grout’s silkworks, the town’s only large factory.

In gaol too, time will have been punctuated by arrivals and departures. The prison community, comprising mainly short-term offenders, was in a continual state of flux and new admissions caused excitement and intrigue, as no doubt would the arrival of two more boys in the House of Correction on 2 January 1840. Time was also measured by the arrival and departure of the prison visitor who presumably did wear a watch for she assiduously noted the hours she spent each day in the gaol.

While Sarah Martin’s visits provided some structure to the prison day and week, inmates’ time was only partially and imperfectly governed at Yarmouth Gaol, as was the case in most local prisons in the 1830s and early 1840s. Drawing on Sarah Martin’s journals and those of the Gaoler, in the coming posts I’ll show how the five boys quickly found ways of making time their own. I hope you will join us!

[vi]Michel Foucault, Discipline and Punish: The Birth of the Prison (1975, trans. Alan Sheridan) (Harmondsworth: Penguin, 1991); Michael Ignatieff, A Just Measure of Pain: The Penitentiary in the Industrial Revolution, 1750-1850 (London: Macmillan, 1978); Alyson Brown, English Society and the Prison: Time, Culture and Politics in the Development of the Modern Prison 1850-1920 (Woodbridge: Boydell, 2003).