Jemima Emmerson takes time between chores to sit on her step, cradling baby George in her arms, and soaking in the warm afternoon sunshine streaming into the yard. She listens out for her husband John to come strolling back from the alehouse, rested and jolly after a hard week labouring. Little John toddles among the clutter of nets and baskets, cupping his hands to catch a butterfly flitting among the nasturtiums that tumble from the window-pots in a glory of orange and yellow.[1]

Mary Jones appears at her doorway. Has Jemima seen her daughter? The woman’s face clouds as her neighbour shakes her head. The girl will get a good training when she comes home she snaps, snatching a basket of twine from the yard and disappearing into the her backroom.

Jemima’s heart is pounding. She has heard Mary beat Charlotte before and dreads the girl’s return. Poor child. Her name is Hodges. No one knows her father. A former husband says Mary, who goes as Mrs Jones, wife of John the sailor.

A few minutes pass before Jemima hears the little girls chattering as they totter up Money Office Row. Mary Jones hears them too, stumbling merrily into the yard, their faces hot and flushed. Charlotte freezes as she catches her mother glowering in the doorway. Come in and strip, the woman barks. We’ve only been gathering a few flowers pleads the girl in a small voice, holding up the loose bouquet to her mother. Strip and get up the stairs and take the whip with you the woman orders.

Mary Jones slams the door and locks it. Jemima hears her clatter up the stairs and sees her draw down the bedroom window. The whip lashes down so violently on Charlotte’s back that Jemima feels the whole house jar. But she does not hear the girl cry out. You cruel wretch! Have mercy on your dear child she shouts up at the window.

At last the beating stops. Mary Jones comes out of her house, still grasping the rope she has used to thrash her child. Who called out in that manner? Jemima owns shouting out for beating your child in that disgraceful manner, squaring up to the furious woman. Disgraceful? Mary Jones retorts. Not at all. I only flogged the child as a child ought to be treated.

Jemima can neither shut out the thudding of the rope nor the silent suffering of the little girl. In the morning she gathers together her neighbours to discuss complaining to the constable. Mary Church goes into the sailor’s house to protest to the unnatural mother. Mary Jones is mending a net in the light by the window. Perched on an overturned packing box in the corner, Charlotte is winding twine. I will beat my child the mother insists. She will not hear advice on how to raise her daughter and turns to Charlotte. If your father was at home, damn you, we would murder you now. The little girl flinches at mention of her stepfather. Soon he will be back from sea.

Elizabeth Thaxter and Sarah Forman are ready to testify to the frequent violence they have witnessed. Ann Read from Peacock Row, where Mary Jones used to live, will speak against her former neighbour. Very often she heard Mary beating her daughter and threatening that if she shrieked, so the neighbours heard, she would give her much more. The wicked mother would keep Charlotte at work braiding twine, from five o’clock in the morning till nine at night. It was no way to treat a child not yet seven years old.[2]

The women fetch the constable. He takes Charlotte Hodges into Jemima’s house to examine the child. Her back is bruised in a most dreadful manner. The girl is taken to the station where the surgeon confirms the bruising and Jemima makes the statement before the Mayor that will form the case for prosecution. Unable to sign her name, Jemima makes her mark with a cross.[3]

Four days after the beating, Mary Jones is admitted to Great Yarmouth Gaol. She is measured by the Gaol Keeper—5”1½ —who enters her details in the admissions register. Twenty-nine years old, with dark brown hair, dark eyes and complexion, and a scar on her arm from burning. She claims she was born at Hopton, a fishing village just south of Yarmouth, and to be married—perhaps to a man from Lowestoft, the Suffolk port where she says she belongs. She works as a braider of nets, a trade she must have learned when young, starting by winding twine for her mother, as her unwanted daughter does now.[4]

A month later, at the Quarter Sessions on 9th September, Mary Jones stands trial before the Mayor in the Tolhouse. She pleads not guilty to beating, wounding, and ill-treating her infant daughter. Convicted by the jury, she is sentenced to two months hard labour, to be served in the House of Correction.[5]

Sarah Martin hears a woman is imprisoned for cruelty to her child. This is the sign she has been waiting. Since 1810 she has attended the poor in the workhouse, comforting the sick, leading prayers, and teaching the children. But others need her guidance. Each time she passes the gaol on her way to the workhouse, she feels a strong desire to bring salvation to the prisoners. I thought much of their condition, and of their sin before God; how they were shut out from the society, whose rights they had violated; and how destitute they were of scriptural instruction, which alone could meet their unhappy circumstances.

Now the time has come to begin her vocation, Sarah Martin dares not admit her purpose, not even to her grandmother, less the project seem a visionary one and obstacles be placed in her way. God lead me, and I consulted none but him. Making enquiries she discovers the woman’s name. Her first request to meet Mary Jones is denied but on her second application, the Gaolkeeper gives way before the dressmaker’s earnest determination.[6]

Mary Jones looks startled when the cell door opens and the Gaoler ushers in Miss Martin. The plainly dressed stranger is almost the same age as the prisoner. She speaks in a low voice to explain why she has come, stressing the mother’s guilt and shame and her need of mercy. Feeling the woman’s eyes boring into her own, Mary bursts into tears and thanks the visitor. The dressmaker opens her Bible to show the tearful prisoner the 23rd chapter of Luke’s Gospel. She does not look at the verses she has rehearsed so often. Her eyes shine as she tells of Jesus, tried before Pilate, and of his stages to the cross.

And there followed him a great company of people, and of women, which also bewailed and lamented him.

But Jesus turning unto them said, Daughters of Jerusalem, weep not for me, but weep for yourselves, and for your children.

The prisoner begs the visitor to return. Sarah Martin agrees. She leaves the gaol, burning with conviction. [7]

What happened to Charlotte Hodges when Mary Jones was arrested? Was she sent to her mother’s family or put into the workhouse? I cannot find a Christening record that marks her birth and parentage. Before 1 July 1837, when civil registration of births, marriages, and deaths was made compulsory, an illegitimate birth could go unnoticed, though usually babies born out of wedlock were baptised. Perhaps Hodges was not Charlotte’s surname. Mary’s union with the mariner John Jones appears not to have been consecrated in a church and I can find no record of the family after 1818. If they stayed together after Mary’s release it is unlikely they will have been welcome at Money Office Row and they may have left Yarmouth for good.

Row 89 where Jemima lived with her grandson in 1851. Charles J. Watson, The Etcher (1881). Courtesy British Museum

I went in search of Mary and Charlotte but I found Jemima. I like to think she and John Emmerson took in the little girl. They were still at Money Office Row when the first national census was taken in 1841. Described as a labourer when his two sons were baptised, John remained in unskilled work. The Emmerson’s eldest son John, a seaman, was living with his parents and eight-years old Elizabeth Scott, probably their granddaughter. [8] In 1851, now aged seventy-two and widowed, Jemima had moved round the corner to Row 89. Listed as a pauper washerwoman, she took in laundry while the parish supplemented her meagre wages with an outdoor allowance to avoid the cost to the ratepayers of taking another aged pauper into the workhouse. Her grandson John, aged eight, lived with Jemima. She was still caring for children.[9]

We have to be cautious when speculating about people’s personalities and motivations on the basis of slender scraps of evidence, drawn sporadically over a lifetime from the distant past. Yet through surviving records from the court and prison, it is possible to freeze-frame a moment in time, as with Jemima’s account of what she witnessed that August afternoon. Her actions and testimony reveal a poor woman’s sensibility.

Jemima had been reluctant, as were her neighbours, to interfere in another woman’s household and maternal duties. Their decision to intervene on this occasion points us to the boundaries of acceptable behaviour in working-class communities concerning the treatment of young children and their protection from violence and excessive labour. Initially Jemima had tried appealing to Mary’s sense of natural justice. But, like other Yarmouth prosecutors, she was willing to call in the law to punish those who defied moral codes and to prevent further transgressions.[10] The sparse documentation of her life suggests a history of steadiness and caring for others that allow me to animate her actions in 1818.

Jemima’s story is important. It reveals the charitable actions of the labouring poor, rooted in familial and communal values of reciprocity and obligation. Many working-class women took responsibility for grandchildren, nieces and nephews, and even neighbouring children, to allow parents to go out to work or to provide a home for orphans who otherwise would be abandoned to the poor law authorities. They were the guardians of community norms, holding to task individuals who neglected their domestic duties or flouted moral standards.[11]

I do not know if Jemima shared Sarah Martin’s piety. But when prisoners responded positively to the prison teacher’s advocacy of Christian fellowship, charity, and kindness, they seem to have recognised in these values the bonds of affection and solidarity that bound the community around them. Weep not for me, but weep for yourselves, and for your children. Was it in realising she had broken those ties that Mary Jones wept, and not just the strange attentiveness of her ardent visitor? 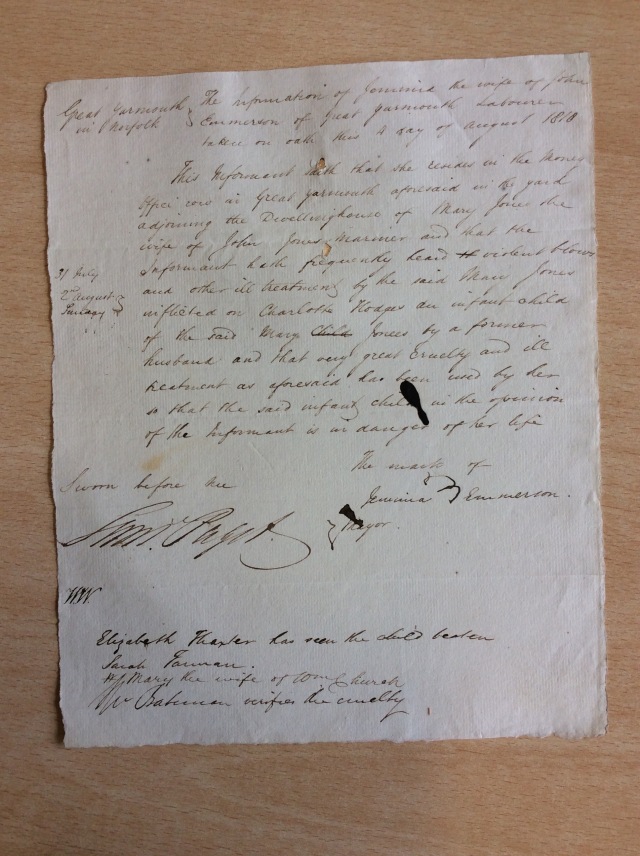 [10] For a study of how working people resorted to the law, see Jennifer Davis, ‘A Poor Man’s System of Justice: The London Police Courts in the Second Half of the Nineteenth Century’, The Historical Journal, 27:2 (1984): 309–335.

12 thoughts on “Have mercy on your dear child”

Dr Andrew W. M. Smith
Reclaiming our University
A Sense of Place
The Cabinet of Curiosity