The three boys, sent down for 30 days hard labour 28 January 1839, are quick to make their presence felt in Yarmouth Gaol. Today, the Governor locks them in the solitary cells for 12 hours for ‘for fighting and making use of obscene language’.

The boys must have been fighting with each other, the only occupants of their room in the House of Correction except for the felon John Bevington (aged 23), charged with supervising them. Walter Tunmore and William Hickling, convicted together as rogues and vagabonds, had spent time on the streets in each other’s company. Now they will have had to adjust their relationship to accommodate Robert Harrod, an older boy, who perhaps they did not know. Maybe their fighting was horseplay. But cooped up for two days with nothing to occupy them once lessons with the prison visitor were over, boredom probably exacerbated tension between the boys as they jostled to assert their place on the ward. 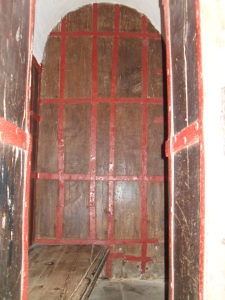 Boisterous play and banter quickly degenerated into squabbles and fights in the gaol, though there were fewer punishments for this than we might expect. According to the Gaoler’s disciplinary book, only 20 inmates were punished for such incidents in 1839, including the three boys on this occasion. Nonetheless, conflict between inmates, often resulting in violence, was as common as conflict between inmates and guards (mouthy insubordination, refusal to carry out orders, and violent resistance). This reminds us that inmates were vulnerable to harm from each other as well as from conditions inside the gaol.

Who was the boys’ ‘obscene language’ directed at – each other or the Gaoler? Most likely rowdiness was their way of taking control over the new environment, filling the space with their voices. Inmates were often noisy at the start of their sentence when they vented their frustration and asserted defiance. Prisoners sent to the House of Correction for hard labour were sometimes sentenced to spend the first and last day of their stay in solitary. This additional punishment was probably designed to subdue inmates as much as to underline the gravity of their offence. Hauled to the gaol by his exasperated mother for being absent from home, Robert Harrod had been ordered by the magistrate straight to solitary when first imprisoned in 1837.

Punishments, however, whether being sent to solitary or deprived of cheese or potatoes, rarely pacified inmates. 80% of those disciplined between 1836 and 1842 would be punished again for infractions. Overwhelming, those most likely to get in trouble were young males. Though about 15% of the prison population was female, they made up only 5% of those disciplined. But nearly 70% of those punished were under twenty. Of these nearly 70% were young males under 17 years old. Shouting, swearing and fighting, therefore, were the means by which boys adjusted to the prison environment by asserting their hardness.

Contemporary reformers worried that in gaol young offenders were susceptible to contamination from older, wily, offenders. But in reality ‘juvenile delinquents’, as they were termed, were influenced far more by their peers than by ‘hardened’ criminals. Like the swaggering Artful Dodger in Oliver Twist they sought status and prowess in the trappings and behaviour of manly toughness. Aged 12, Robert Harrod already bore signs of a precocious masculinity; on his arrival in prison in 1837 he was tattooed with a ring on his finger and blue dots on his arm – the youngest tattooed prisoner I have found.

There is another reason, however, why the three boys may have vented their voices. Walter Tunmore’s elder brother William, aged 17, was also in the House of Correction, serving three months hard labour for being a rogue and vagabond, suspected of stealing. He had been sent down 11 November 1839, just a week before Walter’s brief admission on suspicion of stealing books. No doubt the brothers had been calling to each other. Had Walter’s recklessness been precipitated by his brother’s and could he have wanted to join William in gaol? The family circumstances of the Tunmore boys and their mates will be explored in later posts.

4 thoughts on “Fighting and Swearing”