We do not know if prisoners at Yarmouth Gaol welcomed in the New Year 1840 for the Gaoler made no note of any celebrations or disturbances. The wheels of justice, however, continued to turn. On New Year’s Day Joseph Burton, sailor, was admitted to the debtors ward, owing £1.1.3 debt and charges to David Little.[i] His family would have to manage without Burton for twenty days. On 2 January, David Cohen brought two boys before the magistrate for breaking a window while attempting to steal from his fruit shop in Market Row. Neither boy had been in prison before. They were sentenced, as rogues and vagabonds, to thirty days hard labour, joining the other three boys currently in the House of Correction.[ii]

In committing the boys as ‘rogues and vagabonds’, the magistrates identified them with the ‘idle’ youths who loitered around the port, seemingly lacking any parental control or other supervision. In her notes, the prison visitor Sarah Martin described each boy as ‘neglected’. Such remarks were frequently made by J.P.s, reformers and philanthropists who saw parental neglect as a major contributor to what they believed was a rising tide of juvenile delinquency.[iii] Is there any evidence to confirm the magistrates’ suspicions and the visitor’s concerns?

Tracing the boys’ family circumstances through parish and census documents provides a context for assessing the statements made about them in the gaol records and Sarah Martin’s observations on their circumstances and character at the end of their sentences. Reconstructing family networks and whereabouts is painstaking work. Individuals at this time often used different versions of their family and given names, while record keepers sometimes misheard or mistranscribed their names.

Walter Layton, for example, was also known as Leighton. The Gaoler described him as pale, with hazel eyes and light hair, and only 4ft 2½ tall.  He would be the youngest of the five boys in the House of Correction. The Gaoler and the prison visitor recorded his age as 10 but in fact he was eleven years old, christened Walter Self Liten, 18 December 1828.[iv] Crime historians have suggested some young offenders lied about their age in order to receive more lenient treatment.[v] While some no doubt made such calculations, many labouring people had rather approximate perceptions of their own and their children’s ages. 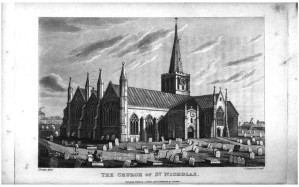 From John Preston, The Picture of Yarmouth (Yarmouth: Preston, 1819)

Christening records, however, provide a more-or-less accurate guide to the ages of most Yarmouth offenders since children tended to be named within days of their birth to ensure they could be given a Christian burial if they did not survive the dangerous early days of infancy. All five boys in the House of Correction were born in Yarmouth and christened at the Anglican parish church St Nicholas, where the gaol’s chaplain, the Revd. Pellew, was minister. Its parish records, now transcribed online, recorded their fathers’ employment; information which is otherwise hard to acquire for the period before 1841 when the census began to record occupation.[vi]

At his baptism, Walter’s father Thomas was described as a carpenter and in 1840 the Gaoler noted Layton senior worked as a cabinet maker. The 1841 Census shows that Thomas had managed to put his two elder sons into apprenticeships; Samuel 17 was training as a cabinet maker; William 15 was apprenticed to a whitesmith, or tinsmith.[vii]

Though Thomas was a skilled craftsman, however, it appears the family depended on his wife working. Charlotte’s occupation was not recorded by the census, which rarely listed married women’s employment but, according to Sarah Martin, in 1840 Mrs Layton was working in a ‘fish shop’ which probably means she cleaned and gutted fish. Customarily, married women in Yarmouth only worked if they had to; the herring trade relied on the labour of young Scottish women migrating to the port during the herring season to prepare the fish for curing. Perhaps the Laytons could not afford schooling for their younger children for Walter knew only the alphabet when he arrived in prison. The family, it seems, were poor. ‘A neglected child’, concluded Sarah Martin; ‘– quite a child- His father a labourer with a large family – his Mother works at a Fish Office. Neglected.’[viii]

In 1841 all Walter’s family, including his two younger sisters, were living at Row 15, or Meeting House Row, one of nearly 150 densely packed narrow lanes at the town’s centre where much of the port’s labouring population lived. Three of the other boys lived in these rows, as did the prison visitor Sarah Martin.

Christmas Patterson’s family lived at Row 41, or Rose and Crown Row named after the public house at its north end. Row 41 was adjacent to Jew’s Row which housed the synagogue where, presumably, Mr Cohen the greengrocer and his wife Esther worshiped. His shop on Market Row was near to both boys’ homes. Like many offenders at Yarmouth Gaol, they got into trouble in their own neighbourhood.

The prison visitor’s hastily jotted notes about Christmas resonate with concern: ‘No mother – father absent – at lodgings – left to himself. Nothing to do; Poor. Neglected.’[ix] The boy was 13 years old, with grey eyes and light hair, 4ft 7½ in height and pale in complexion. Born at Christmas, as his name indicates, the festive season 1840 must have been hard for the boy, the first spent without his mother Mary who had died the previous spring.[x] 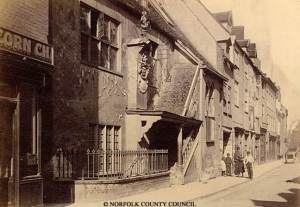 The Tolhouse, Great Yarmouth Gaol and House of Correction

At Christmas’s baptism, his father Jonathon had been working as a labourer.[xi] Now, as Christmas told the Gaoler, his father was working as a malster. It is unclear if this will have been skilled work but it took Jonathon frequently from Yarmouth and the Patterson children were left to fend for themselves. That year Henry, aged 10, and Mary Ann, aged 15, would follow their brother Christmas to gaol.[xii]

When Mary Ann was convicted of ‘disorderly conduct’, Sarah Martin noted she had been living with her brothers in ‘the house of Mrs Baldral with whom her father lives’. The prison visitor clearly believed Mrs Baldral was a prostitute who encouraged Mary Ann and her own daughter into the trade.[xiii] In 1841, however, the Pattersons were living together as a family at Rose and Crown Row. Jonathan had managed to place his son Christmas in an apprenticeship to a cooper, while his daughters were working as weavers in the silk factory.[xiv]

Like Walter, Christmas seems to have received little or no schooling, being able to read just three letters according to his prison teacher. Both boys, like most children living in the tiny, crowded row houses, will have spent much of their time on the streets which, along with the quayside and the beaches, were their playground. To the town’s respectable inhabitants, these children will often have seemed loud, mischievous, even threatening.

We cannot tell from the census and parish registers if these two particular boys were loved or ‘neglected’ by their parents as Sarah Martin thought. But read in conjunction with gaol records and the prison visitor’s notes, they reveal the pressures on poor families that led some children into trouble with the law. Tomorrow we’ll examine the consequences of poverty and bereavement for the lives of the three boys already incarcerated in the House of Correction with whom Walter and Christmas would spend the next month.

[iv] 18 December 1828, 1813 to 1880 Baptism Project Great Yarmouth St Nicholas, http://freepages.genealogy.rootsweb.ancestry.com/~tinstaafl/Church_Pages/yarmouth_gt_1813.htm. Thank you whoever made this database available. It’s a wonderful source for family historians looking for ancestors in Great Yarmouth.

[v] J.J. Tobias, Crime and Industrial Society in the Nineteenth Century (Oxford: B.T. Batsford, 1967); V.A.C. Gatrell and T.B. Hadden, ‘Criminal Statistics and their Interpretation’,  in Nineteenth-Century Society: Essays in the Use of Quantitative Methods for the Study of Social Data (Cambridge: CUP, 1972), pp. 336-396

[xiv] 1841 Census, HO107: 793 . Information about the Rows in this post is taken from Mark Rumble’s excellent online survey, The Revised History of Great Yarmouth, http://greatyarmouthhistory.com/Revised%20History/Revised%20history%20masterpage.html

The Cabinet of Curiosity